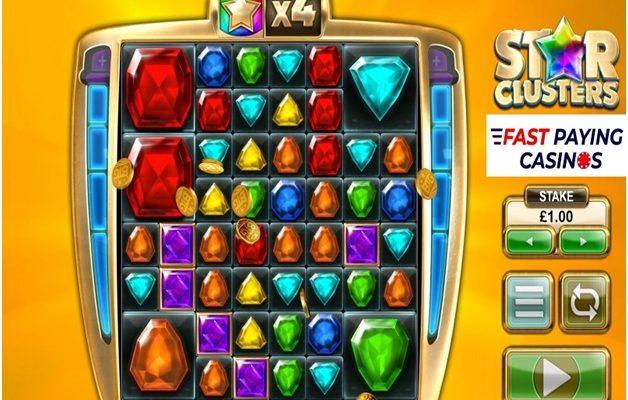 Megaclusters pokies come from Big Time Gaming (BTG) company. As you might have gathered from the name, Megaclusters takes cluster pays grid pokiess and elevates them to the next level. BTG has taken elements of their highly successful Megaways mechanic and revamped it to fit the grid pokies format. Megaclusters presents a brand new way of gaming that may appear slightly confusing at first.  But with an understanding of this pokies concept you will know it better.

How does Megaclusters work?

Since Megaclusters works hand in hand with grid pokies. Grid pokiess are a relatively new way of playing pokies that use rows, columns, but no paylines. Instead, groups of similar symbols land in clusters to form winners. Five of a kind is the typical minimum number required – touching horizontally or vertically, though occasionally diagonally may be accepted. Clusters can appear anywhere on the grid; they do not have to land in consecutive columns, nor do they need to begin on the first column. Once a winning cluster forms, it not only causes a payout but usually triggers an accompanying feature.

This is where Megaclusters comes in. When a winning cluster forms, each symbol involved explodes and is replaced by 4 smaller symbols. Like Reaction mechanics you might find running alongside Megaways, these new symbols can potentially create new clusters of their own, causing a chain reaction. Winners continue to form up and pop until no new clusters appear. Then it’s on to the next spin.

The first Megaclusters pokies unleashed on the gaming public was Star Clusters. Possessing symbols and a UI that is unmistakably BTG’s, the rest of the game is utterly new.

At the core of the Megaclusters mechanic are cascading symbols and reactive wins similar to any other grid pokies. To start a round, you will have 16 symbols dropping onto the 4×4 grid.

Wins are awarded for clusters of five or more matching symbols landing horizontally or vertically connected. In a first step after the initial win is paid, each winning symbol will be replaced by four smaller random pay symbols or wilds, giving you the potential for maximum 16×4 = 64 symbols in the base game.

Any new wins occurring will shatter and disappear after which the remaining symbols will drop down and new symbols cascade into the empty spaces. Don’t be surprised to see the background colours change as they adapt to the gem colour in the current winning cluster. The reactions will continue as long as more winning clusters land after a cascade. All split symbol positions will be reset to the default before the next spin sequence.

What features come with Megaclusters?

With Megaclusters pokies you will find some of the best features. There are reactions feature and  Free spins triggered by a consecutive number of reactions. Then comes the Wild multipliers and Progressive multipliers. Also find expanded grid size due to symbols of ever-decreasing size.

As mentioned, the Megaclusters revolution is still in its infancy, so a major part of the excitement is seeing what will happen next. A significant number of developers use Megaways in their own games, and there is no reason to suspect that Megaclusters won’t be a licensing success as well. That being the case, prepare for a host of clever features being integrated with the possibilities that Megaclusters offers.

Grid pokies have proven immensely popular thanks to games like Reactoonz or Jammin’ Jars, garnering hordes of dedicated fans. This is thanks to complex gameplay, high power math models, and huge potential, not to mention the sheer fun of rocking through long chains of consecutive winners. The genre has matured nicely, offering themes and gameplay to entertain practically any type of player.

Hitting five or more winning reactions in one spin sequence will trigger the Free Spins feature. Keep an eye on the indicators on the side of the game window to follow the progress. You will get 2 free spins for five reactions and an additional +1 free spin for each reaction thereafter.

Before the round starts, the grid will increase to an 8×8 size, giving you a potential to have 256 symbols in play if you manage to split all 64 symbols into four. Plus, any accrued Gold Wild Multiplier is carried over into the round and will further increase following the same principle as in the base game, no limits.

However, it won’t reset at the end of a free spin and will instead keep growing until the feature concludes. Should Gold Wild Multiplier reach a multiple of 10, e.g. 10x, 20x etc, then it will retrigger +2 free spins, again no limits.

The introduction of Megaclusters provides a brand new environment for gamblers to explore. Just as Megaways was a fundamental shift for pokies, Megaclusters has the same next-level feel to it. (inputs from various sources)