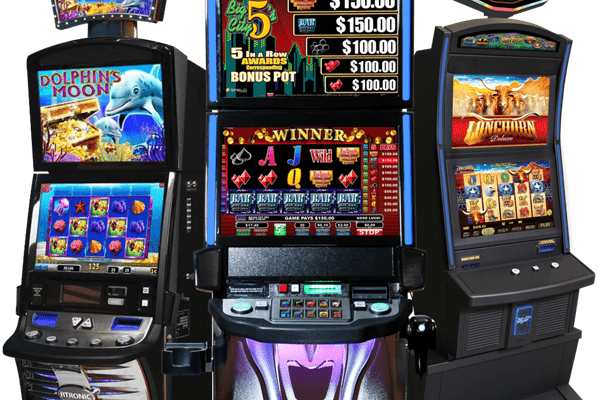 Atronic pokies machines are those pokies that are developed by gaming company called Atronic. This company was established in Austria in 1993 and became a leading provider of casino games and products, including linked gaming solutions.

In 2008, the Austrian company formerly known as Atronic International was taken over by the American company now know as GTECH. This effectively put an end to the brand name and identity, as all of the company’s employees and game titles were transferred over to one of the world’s largest and most successful provider of gambling software products. Just to put it in perspective, GTECH also owns the immensely popular IGT pokies machine development studio as well as Spielo and Lottomatica, a company that is based in Italy.

Atronic pokies machines can only be found at land casinos and few at online casinos. These games are presented on the software studio’s self-manufactured arcade machines, complete with dual screen capability and ergonomically designed player control panel.

One of the defining aspects of many Atronic games machines is there size. As instead of going big and bold, the betting portals are relatively small in dimension as oppose to the many modern pokies machines which loom over the player which huge screens and imposing branding panels.

Some of the common pokiess games from Atronics is the Spinx video pokies, that  offers 5 reels and 5 paylines filled with timelessly iconic symbols from the history and culture of Ancient Egypt. This game presents the riches and prosperity of its time with many golden icons that spin in 3D motion whenever a win is hit. Also this pokies comes complete with a bit of bonus action, allowing punters to explore the inside of an Ancient Egyptian tomb to find some really lucrative loot. If players like what they see with that pokies machine, then they can also check out the upgraded version, Sphinx Ultimate Edition Cleora.

Some of the other games that have been manufactured by Atronic include Pirate’s Cove and Mystic Pearls, two games which take players on exciting spinning adventures under and over the seas. Both games have 5 paylines, but Pirate’s Cove overs the most chances to find a winning symbol with 30 paylines to Mystic Pearl’s 5. Even so, players of the latter will be able to enjoy a round of 15 free spins if they happen to find three scatter symbols in any position on the reels, meaning that there will be plenty of chances to unlock the game’s ultimate jackpot prize.

Another is  Princess of the Amazon pokies machine, featuring up to 20 free games with a 2x multiplier, not to mention some truly beautiful spinning action that revolves around a magnificent Inca queen.

Mighty Miner, is  another 5-reel video pokies that takes players deep underground to find some dazzling gems in a pick ’em style bonus side game. Players of Mighty Miner can also pick up some free spins with a special wild symbol that appears on the fourth reel of every bonus spin.

One of the most famous and well-known pokies machine created by Atronic is Big Easy 100, a video pokies that gives spinners the chance to discover the magical music of New Orleans. This game is not only a pleasure to the senses – showing a wide variety of mouth-watering foods and intoxicating drinks from the deep South of America along with a smooth jazz soundtrack – but it is also a pleasure to play thanks to its 25 paylines, gamble feature, wild symbol and free spin-triggering scatter icon. Punters can also relax in the jazz clubs with a rewarding bonus side game.

They also have games which are branded after the popular TV game show, Deal or No Deal. This means that players can get stuck into some spinning gameplay with special bonus features which incorporate elements from the game show. What’s more, Deal or No Deal games by Atronic feature progressive jackpots to make for some huge winning potential.

Advertised under the IGT software name you can find these game nowadays at casinos of your choice. The Big Easy 100, and  Treasures of the Pyramids, are immensely popular game easily found at many online casinos to enjoy.

There are many Atronic brand pokies machines for sale at online sites. Games like  Atronic Harmony, Atronic Emotions, African Cash, Bamboo Forest, Deep Diamonds, Fish Tails, Imperial Rome, Pirates Cove, Sphinx Classic, Thai Gold, Tiki Tango to name a few are the pokies machines that are easily available on sale at various online sites in Australia. These games are in excellent condition and are all parts complete and working.