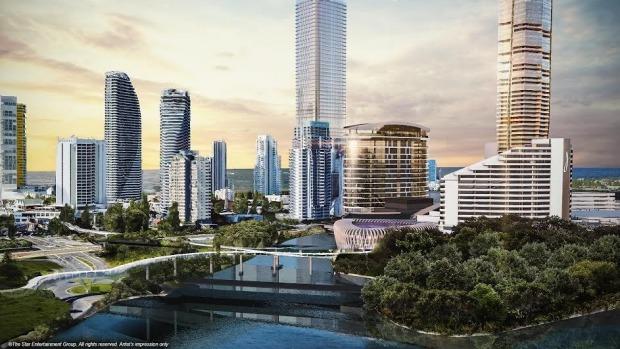 The Star Entertainment Group and its Hong Kong partners may build up to five new towers with 3000 hotel rooms and apartments on the Gold Coast as part of a $2 billion masterplan centred around the expansion of its ageing Jupiters casino.

Construction of a proposed 200-metre hotel and apartment tower, which includes 350 apartments and 700 hotel rooms of 4.5-star quality, will start in 2017. Four further towers may be built at two-year intervals depending on demand for the initial tower.

There is likely to be one tower comprising residential apartments and a stand alone hotel as the second tower. The remaining three towers will be a mixture of serviced apartments and hotel rooms.

The Star and Hong Kong investors Chow Tai Fook and Far East Consortium will each hold a third stake in the initial tower and the ASX listed company will then use the proceeds from apartment sales to fund its portion of the hotel development.

“For subsequent towers we will look at the mix of customers we are getting and where we see demand by 2018 to determine the brands, but there will be nothing under 4.5 stars.”

The Star’s only outlay will total $100 million on a live sports theatre, new restaurants and tweaks to the casino floor spread over the next four years.

The proposal is in addition to the $345 million redevelopment of Jupiters that is focusing on the refurbishment of 600 existing hotel rooms and the addition of a six-star, 17-storey hotel tower, with more than 50 luxury suites, which is under construction.

The deal will help cement The Star’s presence on the Queensland tourism strip ahead of a fresh challenge from rival Crown Resorts.